The kordula was still hurting, poisoning the other, it sounded in court 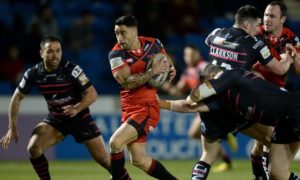 According to witnesses who spoke today at the Hodonin District Court in the case of the lawsuit of the Vice-President of the Czech Football Association Romana Berbra and former Chiefs of the Judges Panel Dagmar Damkova to former referee Antonín Kordul, Berbr criticized Kordula for his presentation of his state of health. Kordula wants to apologize for statements in the media. According to some media reports, Cordula has suggested that Judge Damková was not the judge, but her life partner Berbr, who does not have any powers .Witnesses who had already spoken in the middle of June before the Hodonin court also spoke of humiliating referees and verbal attacks on the Berber side. Today, among others, the former referee, Robert Hájek, testified. According to him, Berbr told Kordul in his seminars that he should think about how he presented his state of health, how he was discussing him, and how he was preparing for matches and reviews. “He criticized me among other things, his remarks were material and shocking,” said Hájek. Former first-round referee and current sports director FK Příbram Michal Paták said that Kordula was still hurt . He also translates to him the term of physical tests that he did not even end up after a vacation.Berbr, according to him, told Kordul at the seminar that, due to his state of health, his colleagues ceased to be annoyed by the referees. Similarly, the South Bohemian judge Jan Jilek said today. “The content of the announcement was to bother colleagues before and after the match, and that his apologies are not working professionally,” Jílek said. that Berbr and Damkova talked about the referees from Moravia as the Asians. Jilek said that was not meant to be serious.According to him, the judges, on the basis of the quote from the series, are sometimes joking when they go to Moravia to go to Asia. “But that’s not a shame, it’s just joking,” Jilek said. The Kordula is not the only one who is in dispute with Berber and Damk. The case was also filed with Libor Kovařík, who started the affair. They demand 800,000 crowns and an apology. After another critic, the former representative Ladislav Visek wants 100,000 crowns and an apology, after an ex-judge Tomas Kovařík they wanted an apology. The Prague court has already ruled in this case in favor of the lawsuit, but Kovařík was preparing an appeal. The court in Hodonín continues the afternoon by interrogating other witnesses. Final speech and verdict could be heard in the first half of October.

« We lost our heads, De Boer did not understand shocking loss with Hapoel
Baroš also scored in the third match of the European League »